Carly produced Mother of George, a film that recently won Best Cinematography at Sundance this year. It comes out in theaters in NYC today (September 13, 2013) and will be in theaters around the country in the next few weeks.  Carly is also currently in production on the film Everything is Copy, a documentary for HBO about Nora Ephron.

Tell me a little bit about yourself, who you are, and where you are from.
I grew up outside of Boston and went to Columbia to major in film studies. I’ve been producing narrative and documentary feature films since 2005, and I love every second of it. While I work extremely hard and live-breathe-sleep film production, I’m unapologetically attracted to sparkly things and blast bad pop music whenever I can. I have a tendency to break into 4pm dance parties while working, and I cherish being able to have a lot of fun while doing my job. 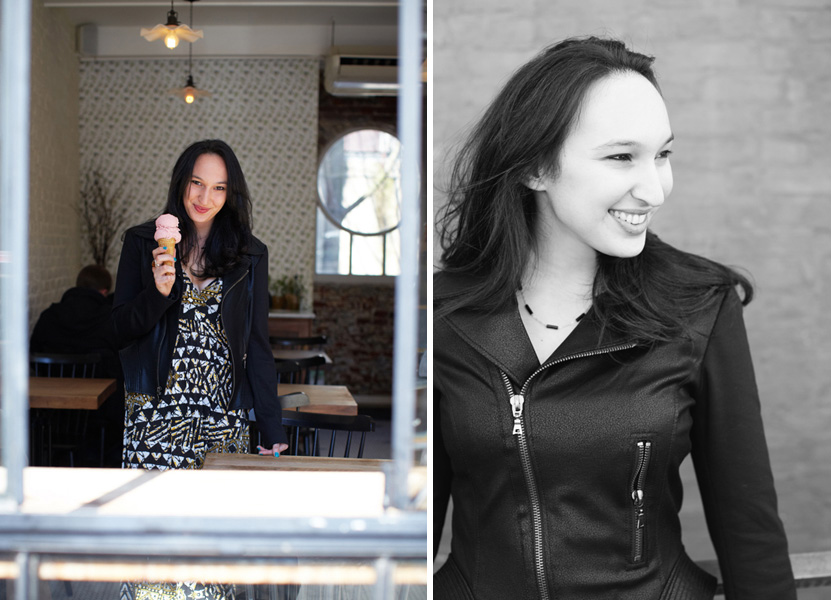 Please tell me what your job as a film producer entails.
I am a founding partner of Loveless, an independent film production company, and its sister company, Loveless Creative, which focuses on commercial production. I founded Loveless with my producing partner, Matt Parker, and we currently have ten feature films in various stages of production and development. As a film producer, I’m in charge of bringing a director’s vision to reality – I develop the script, help put together the financing, hire the cast and creative team, and oversee the production – while having the director’s back throughout the entire process.  The films I choose to work on are extremely varied. I’ve found that working within a wide range of genres is the best way to keep me passionate. In general, with some exceptions, the projects I gravitate towards have a similar theme of giving a voice to a community or type of person who hasn’t yet been showcased. By promoting stories about misrepresented or underrepresented communities, I believe movies can help open people’s minds.

How did you figure out what you wanted to do?  Did you have aha moment?
My “aha” moment came very early. I was in high school when I learned what a producer did, and I knew immediately that combining business and art would be my gateway into the film industry. I have always loved numbers and strategic problem solving – coupled with my flair for the dramatic, the business side of filmmaking is perfect for me!

How did you get where you are today?  What has been your career path?
While in college, I interned for an independent film production company and I was given the wonderful opportunity to start working on set at a very early age. I worked on script development during each school year and went on set every summer. My mentor Gill Holland pushed me hard, and put me in positions that I wasn’t quite ready for, but I lived by the mantra “fake it ‘til you make it.” I line produced my first film when I was 21, and I then joined Gill as a partner at The Group Entertainment, a management/production company. While at The Group, I honed my physical production skills and began working with writers and directors to creatively develop scripts. After six formative years with The Group, Matt and I left to form Loveless. I have been incredibly lucky to work on twenty-five films, and I continue to work with filmmakers who inspire me daily. 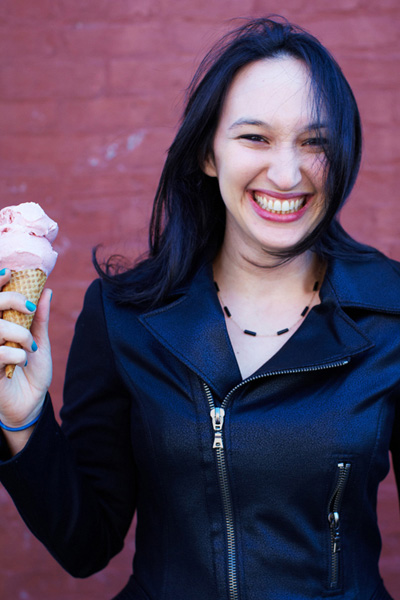 What is one of your earliest film memories?
The first film I saw in the theater was Curly Sue with my older cousins, and I wanted to BE her.

How did you learn to do what you do as a producer?
By making a lot of mistakes! As I said earlier, I was very young when I started working as a producer, and I was too concerned with pretending to be perfect to ask many questions. On the first film I line produced, I had to Google “petty cash” when someone asked me for it and I had to call my dad to decipher a basic crew deal memo. After a couple of almost-disasters, I realized that leaning on my co-producers and collaborators was the only way to learn how to make a movie. The film industry is changing every day, and it is through constant conversations with other filmmakers that I adjust how I approach my job. On every film, I’ve picked up a trick or two from the attorneys, accountants, and creative team, and I try to apply them to the next project.

What is one of your favorite projects you’ve worked on?
To date, Vera Farmiga’s directorial debut, Higher Ground, was the most creatively and logistically ambitious film I’ve produced. On a very limited budget, we had children, animals, live music, a cast of forty, and a pregnant first-time director/star. On top of all of that, we were dealing with a sensitive subject and were always conscious of portraying evangelical Christians openly and fairly. I’m tremendously proud of the film, which features some of the most heartfelt performances I’ve seen in recent years. The artistic collaboration that I experienced on Higher Ground has set the bar very high for all of my other projects.

What are you currently working on?
I’m currently in production on Everything is Copy, a documentary for HBO about Nora Ephron. Delving into Nora’s writing and theories on femininity, the media, and New York City has been more of an inspiration than I could have imagined. I truly regret that I never had the opportunity to meet her before she passed away, but I think we are creating something really beautiful with this film. We are also casting two films, a comedy called Babyshare and a thriller called Gringo Bay, which we hope to film early in 2014. I’m in development on a variety of other exciting projects and I’m simultaneously working on commercial productions with Loveless Creative. And a film I produced, Mother of George, which won the Best Cinematography Award at Sundance this year, comes out in theaters in New York on September 13, and expands to the rest of the country in the next few weeks!

Describe your style.  Is your personal style different from your professional style?
My personal and professional styles are pretty much the same at this point. I went through a time when I tried to be super professional and serious, but I realized I was repressing my personality, which in turn, was making me not as strong of a leader. I think that my uncontainable goofiness makes people feel comfortable being themselves around me, which engenders creativity. Style-wise, I do try to look like a little more of an adult when I’m working and try not to wear off-the-shoulder shirts every day. 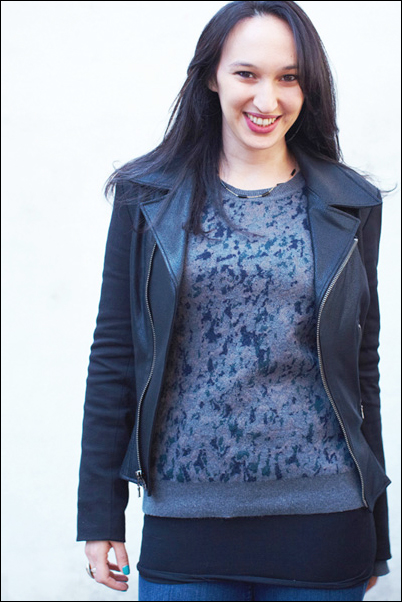 Anything unexpected about being a film producer?
I didn’t realize that being a film producer means that you’re also a group therapist. A large part of my day is spent discussing and analyzing the insecurities, aspirations and personal dramas of the director, cast and crew. So much of my energy has to go into creating a work environment where everyone feels respected, supported and understood. It’s a great challenge every day, and I truly love it.

Any interesting stories about the work you’ve done or an experience you’ve had?
Snoop Dogg sent his manager over to ask me to be a backup dancer after seeing my moves at a party at Sundance in 2005. Not surprisingly, my parents didn’t support my dropping out of Columbia for this purpose.

What other creative things are you currently doing?
I have danced my entire life, and still try to go to ballet or jazz classes at least once a week. Although I’m no longer performing as I did throughout my childhood and college career, I find the 90 minutes that I’m taking a dance class to be the highlight of my week. While taking a challenging class, often accompanied by beautiful live piano music, if I let my mind wander to work-related problems, I’ll forget what my legs are doing and look like an idiot. The intense focus on something other than film for a couple of hours at a time is so refreshing. Even if I walk into class checking my phone and worrying about a minute production problem, I always leave calm and smiling, with a different perspective on my current work challenge.

How do you define success, and what has helped you to become successful?
I define success as never settling. My producing partner Matt has really taught me to never be comfortable where I am and to always be planning for the next year, three years, and ten years. We push each other constantly, and that perpetual striving for bigger budgets and more creatively impacting projects will help us succeed. 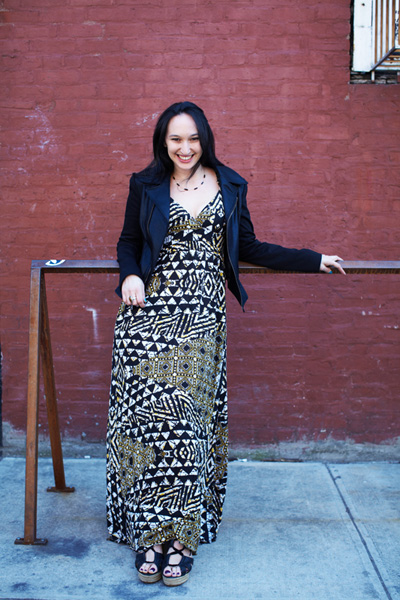 Any advice for someone interested in following in your chosen path?
No job is too small and no credits are unimportant. When you’re first starting out, use any excuse you can to get on set and observe how a film comes together. Even if you’re working as an intern in the wardrobe department and you really want to be a cinematographer, any experience will help you to understand the intricacies of a film set.

What is the best advice you’ve ever received?
A producer whom I respect a lot once told me “Rejection is God’s protection.” There have been countless times when I’ve repeated that to myself while bumming about an actor passing on a project or an investor falling through. It helps me remember that there are many things in life and business that are out of our control, and it all works out if you have the right optimistic attitude.

To learn more about Carly, Loveless and Loveless Creative, please check out the following sites: www.moreloveless.com and www.lovelesscreative.com