Stephen Niedzwiecki in his office in New York City.  As the Founder of YARD, a strategic image-making advertising agency, he has been able to combine his two passions – his love of music and his desire to create. Photographs by Kristin Gladney.

Tell me a little bit about yourself, who you are, and where you are from.
I’m originally from NYC, but as a kid my family split our time between the city and Israel – which is where I was first really exposed to a culture that centered around music and celebration; all of the social gatherings there were centered on music. As it turned out, music became a major influence and it still continues to influence and play a huge role in my creative life today.

As the Chief Creative Officer of YARD, what does your job entail?
YARD is boutique – so I work with the entire creative team and the client relations teams to create really compelling imagery that’s also strategic and long-lasting. As much as I’m directing and steering creative projects, I’m also constantly being inspired by the creativity of our team here. 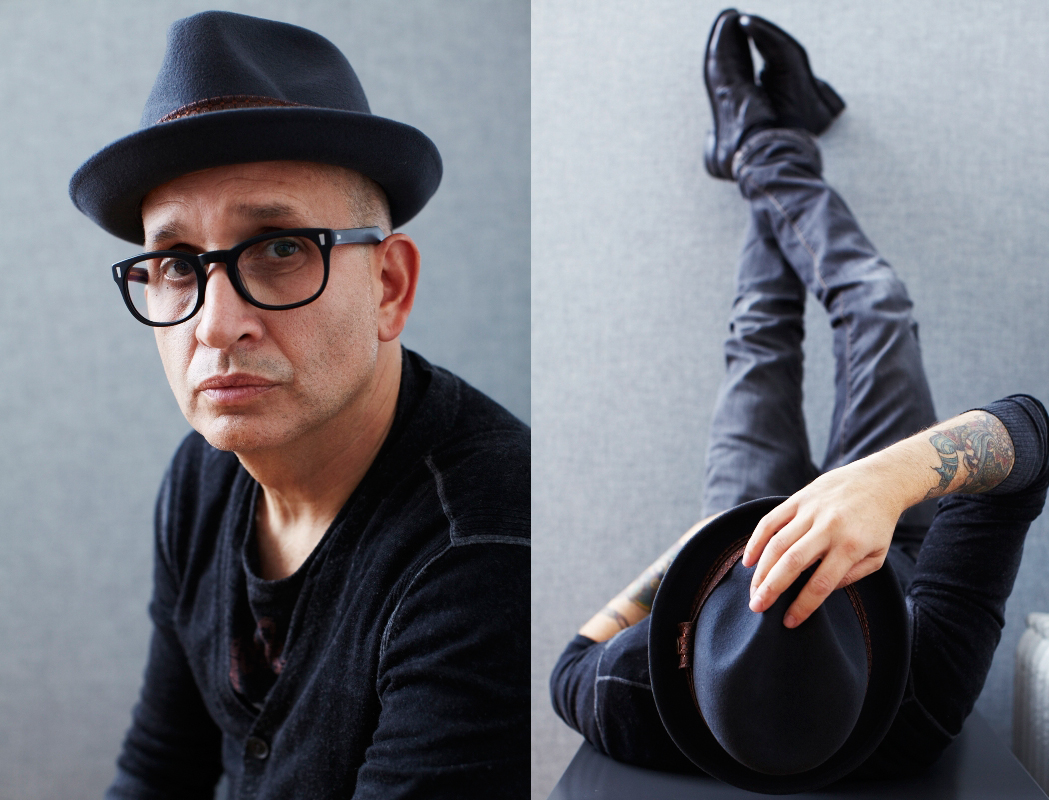 How do you describe YARD as a creative agency and the kind of work you do?
YARD is a New York-based agency with a focus on fashion, beauty, wellness and luxury lifestyle brands. On the one hand, strategically driven shops typically lack the creative vision (and courage) to push the creative envelope and stay ahead of the fashion curve. By contrast, creatively-led agencies are often distracted by the next hot trend (or model or photographer) and miss the opportunity to really understand where the brand is coming from and what motivates the target consumer. At YARD, we’ve struck the right balance of brains and beauty.

And as brand stewards and storytellers, YARD acts as a true collaborator for client teams. We’ve got a pretty great track record of leveraging deep consumer and cultural insights to create, revitalize and build brands like Tumi, Banana Republic, John Varvatos, Converse, Perry Ellis, Timberland, Rockport and G.H. Bass, among many others.

What has been your career path? How did you to where you are today?
I’ve had a totally unconventional path. From working in New Yorks iconic clubs in the mid to late 80s as a bartender and DJ, to working in-house for brands like Nautica and GAP – starting YARD was not something that I would have predicted. But I had been doing freelance work for awhile, building brands and bouncing around at agencies in the UK – and when I got back to NYC, a friend of mine who was a big casting director asked me if I wanted to share a workspace. It was the first time I had to pay rent and so I figured, “why not start something?” I knew there was a space for an agency that was more than just image-driven, but was also strategic. So I started building a team of talented people to work with and I committed to keeping it independent. We’re still privately owned today, which gives us the freedom to be creative and stand apart. 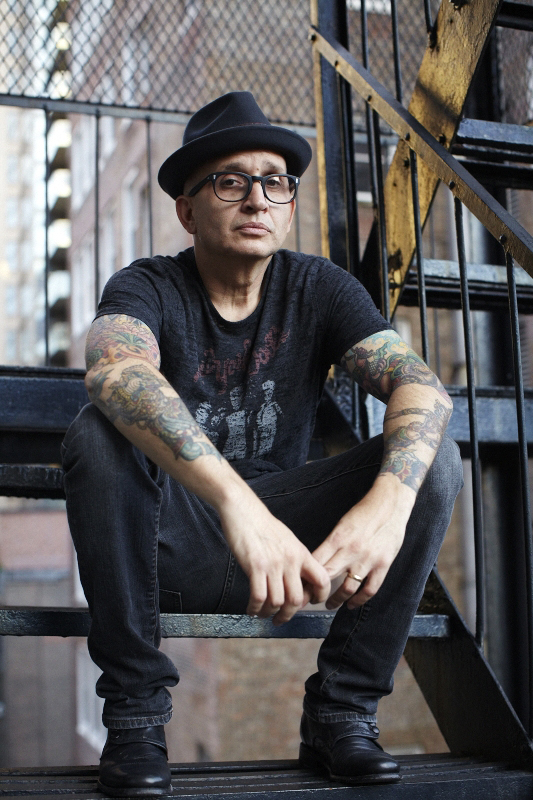 What is the story behind the name of your agency: YARD?
When I was living on the West Coast working on GAP, I was spending a lot of time in Orange County in these very ‘Edward Scissorhand’s-esqe’ neighborhoods, and realized that even though people’s front yards tended to all look alike, their backyards were totally different. People had really made those spaces their own; it was like personal branding. And so the name is really an analogy for what we do for brands today. Nothing we do is cookie-cutter.

How did you figure out what you wanted to do?  Was there anyone in particular that influenced your life, therefore gave you direction?
My parents always encouraged my artistic interests, giving me painting lessons from a young age, etc. – and my father used to take me to carnivals around New York, which is where I first saw a sort of alternative lifestyle. From an early age, I was drawn to people who were taking chances and experimenting with being different. But when I got to college, my parents wanted me to be pre-med. To appease them, I decided that I would do medical illustration – which was a dying art even then – but at my very first autopsy, I passed out. I knew I had to do something different but I didn’t even know that branding and advertising existed as a career path until I met the boyfriend of a friend’s mother who was making it big in European advertising. That’s when I knew I wanted to try it. It was my ‘aha!’ moment. 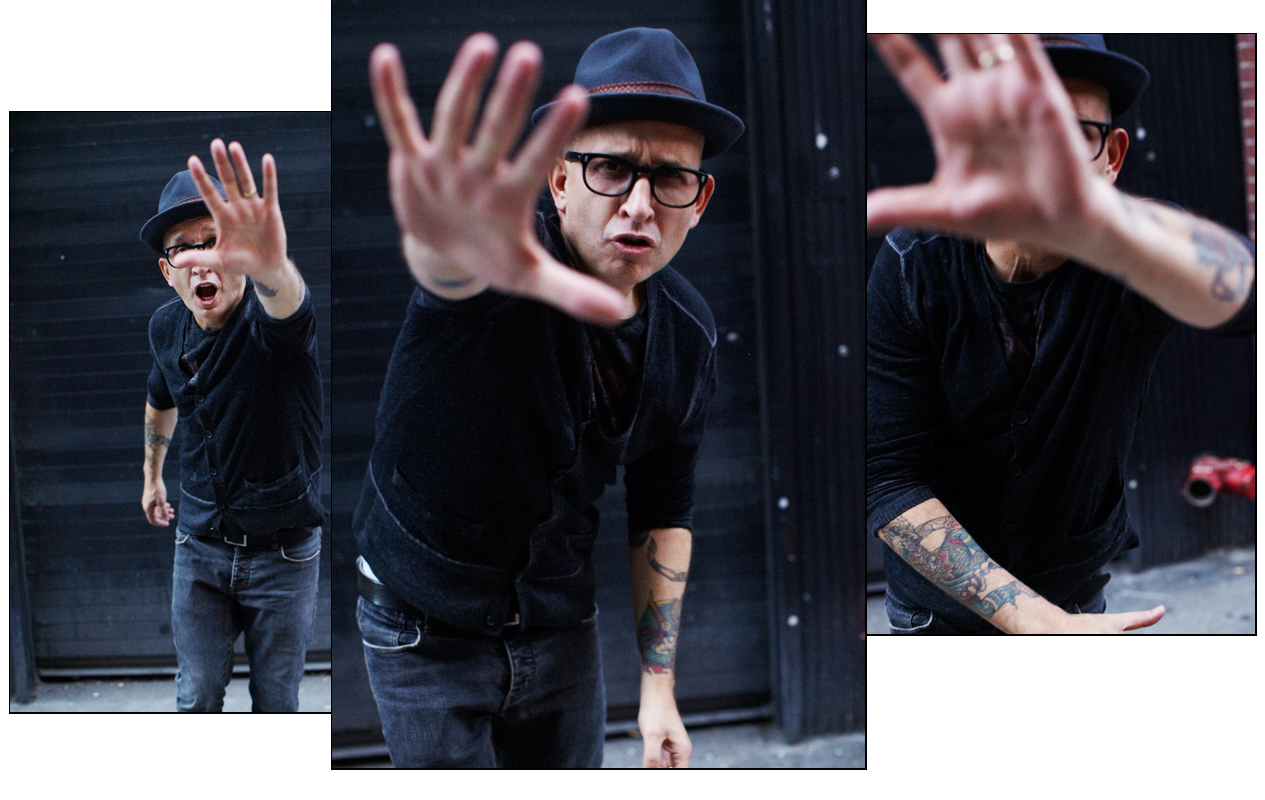 How did you learn to do what you do?
I got the most experience when I was freelancing at Estee Lauder. They asked me if I had experience in 3D design and I said yes, but of course I didn’t. Classic ‘fake it ‘til you make it’ story. I took the job and worked my way through it, including accidentally stabbing myself in the groin with an X-acto knife and being rushed to the hospital. It was taking that chance and going for it that led me to become a design director for Origins.

What are you currently working on?
YARD is lucky to be working on a lot of projects at the moment, ranging from heritage brands that need a little boost, to cutting-edge packaging projects and global campaigns for luxury lifestyle brands. Believe it or not, I’m working on all of them to some extent – with the support of a great team, of course.

Describe your style.
The whole point of starting your own company is that you can wear whatever you want. Growing up, my style was retro rockabilly; today, it’s aging rocker. 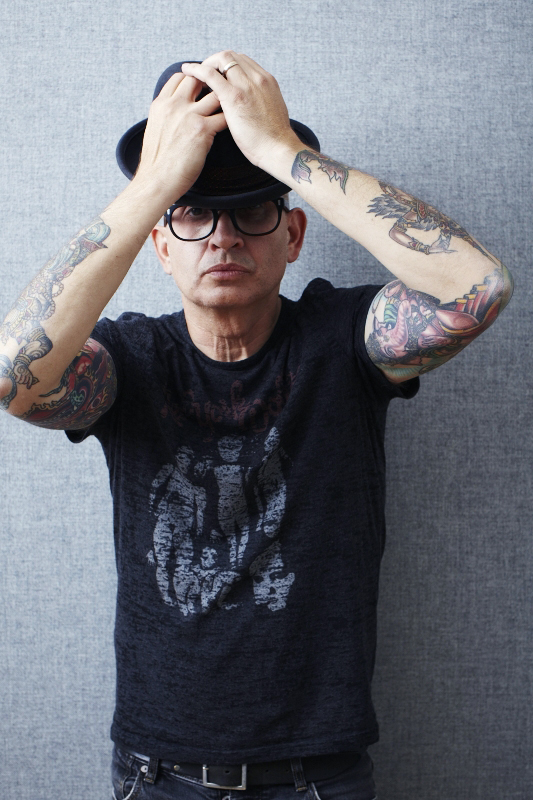 What do you love about the work you do?
I love the people who I meet. Whether it’s internally at YARD or within the teams we work with on set, I’m inspired by collaborations and feel honored to work with so many talented people each day.

How has Rock and Roll influenced your work?
I’ve been lucky enough to combine two major passions – my love of music and my desire to create. Before YARD, I had huge success using music for GAP and it showed me that it was a powerful combination when done in the right way and for the right brand. Now I’m going into my ninth year working with the designer John Varvatos. The whole basis of the platform we built for the John Varvatos brand was the ‘Rock N’ Roll Gentleman,’ which uses iconic musicians shot by legendary rock documentarian Danny Clinch. As a result, I’ve been able to meet and work with some of the most amazing legends in music history. 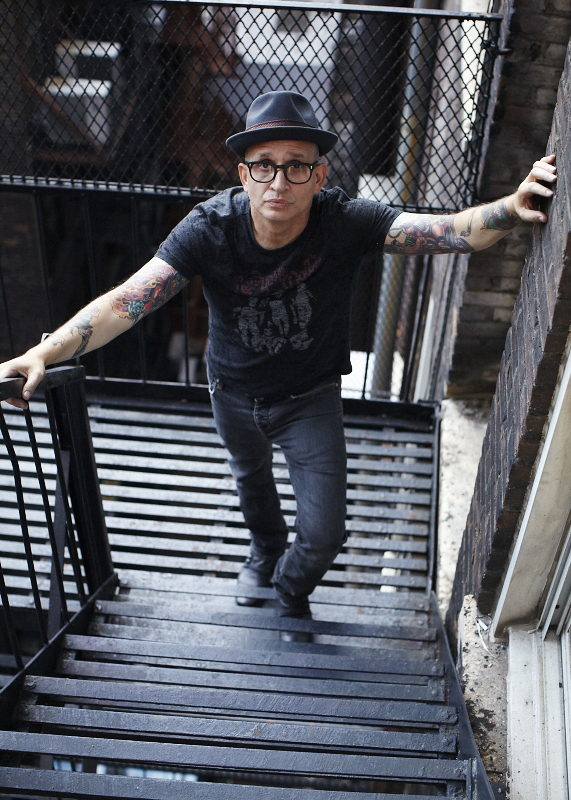 What is one of your earliest Rock and Roll memories?
I can remember being 8 years old and playing with 45s on a turntable. Back then I was listening to Jefferson Starship and The Archies – but pretty soon my older brother’s taste in rock started to have an influence on me. When I was 16 I saw Queen at MSG and Frank Zappa at a small college theater. Those are unforgettable.

Where do you find inspiration?
Everything inspires me. That’s the beauty of living in NYC. You take the subway and you get inspired. I make sure not to live in a bubble so I can always experience that. You have to be open no matter where you are, not boxed in by any boundaries so you can see inspiration around you. It’s not about where you’ve come from or how far you’ve gotten, it’s about living in the moment. I go to shows 3 or 4 times per month, not just to be inspired by the music but to feel the energy of the crowd. And I talk to my five year old for hours. No one has fewer boundaries than a child.

Is there someone you’ve always wanted to collaborate with?
When I think of the John Varvatos campaigns specifically, there are so many musicians who are long gone who I wish we could have worked with. The Clash. Johnny Rotten. Jimi Hendrix. It’s endless. I’ve also always wanted to do a campaign for Triumph motorcycles; every agency wants a car campaign, but for me, it’s motorcycles. Growing up, I always had friends with bikes and Triumph was the epitome of cool.

How do you define success? What has helped you to become successful?
Success is when you’re still happy doing the thing that you do. It’s about being happy with what you’ve chosen because you’re doing it on your terms – the way you want – and achieving the vision that you’ve set out to achieve. That applies to me personally and to the brands that we work with.

Any advice for someone interested in following in your chosen path?
My advice would be to follow your creative heart. If you’ve decided to be a designer or work in a creative field, there’s a reason for it and you have to be passionate. After all, you studied the art for at least 4 years in school. So don’t follow the paycheck or the success; follow the work and the journey. If you do this, then both the paycheck and the success will come.

What is the best advice you’ve ever received?
When you’re happy for others, happiness comes your way.

To see more from Stephen Niedzwiecki, check out the YARD website:  www.yardnyc.com